Our next item makes me want to breakout into song, a la Mrs. Lovett, though I highly doubt that Mrs. Weasley uses any sinister ingredients!


"Mrs. Weasley, however, had sent the family owl, Errol, with an enormous fruitcake and assorted meat pies" (Goblet of Fire 28).

There are several recipes for various meat pies in The Unofficial Harry Potter Cookbook. And several of those are classified as "Mrs. Weasley recipes." However, many of them would be extremely difficult to convert for vegetarians. The Mrs. Weasley recipe that would be easiest to vegetarian-ize is extremely similar (almost identical) to vegetarian steak-and-kidney pie (which we have made already), so I'll be using the Meat and Potato Pie recipe that appears in the "Treats from the Train" section. 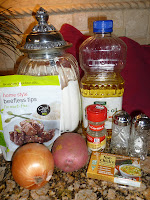 1. Place the flour and salt in the bowl of a food processor and pulse to combine.
2. Scatter the pieces of butter and shortening over the flour mixture and pulse until the mixture resembles coarse yellow meal, 15-20 pulses. 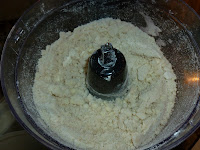 3. Turn the mixture into a large bowl and sprinkle with 1/2 cup cold water. Toss with a rubber spatula until the dough sticks together. Add more dough 1 Tbs at a time if the dough is to dry (I added 1 Tbs).
4. Divide the dough in half, form into disks, wrap in plastic wrap and refrigerate for at least 2 hours or up to 3 days.

To make the filling for a vegetarian, I have completely changed the order of events and cooking times. So if you are not going the veggie route, you'll want to pick up a copy of Ms. Bucholz' book.

5. Heat the oil in a large skillet. Add the chopped onions to the skillet and saute until well browned.
6. Add the beef tips and cook until completely thawed and starting to soften. Sprinkle with 2 Tbs of flour, and mix with a wooden spoon until combined. 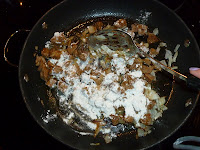 7. Slowly pour in the prepared No-Chicken broth while stirring. Bring to a simmer and cook, stirring occasionally, for 30 minutes. 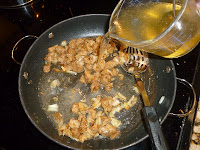 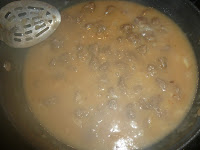 8. Add the chopped potatoes and carrot, sage, salt and pepper, and cover. Cook for another 30 minutes, stirring occasionally. 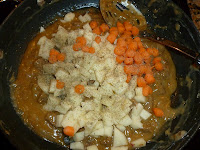 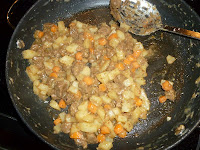 9. Remove from the heat, transfer to a bowl, and cool to room temperature.
10. Preheat the oven to 350 degrees. Remove the chilled dough from the fridge and roll out one of the disks on a well-floured surface until very thin. 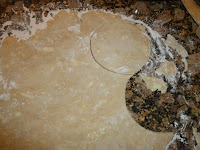 11. Cut out six (but really, I could've made 8 pies with this recipe...) circles of dough and fit into the cups of a muffin pan, leaving the overhang. 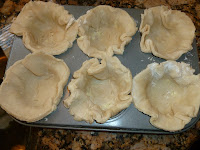 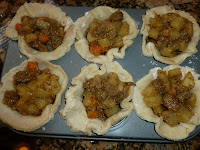 13. Roll out the other disk of dough and cut 4" circles.
14. Brush the overhang of the pies with a little water, lay the dough circles over the filling, and crimp the edges with your fingers or a fork.
15. Cut slits in the tops of the pies for vents, and brush the crusts with the egg mixture. 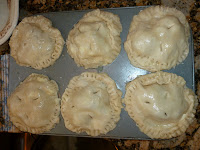 16. Bake for 45 minutes to an hour, rotating the pan midway through baking. 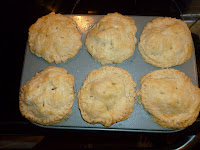 17. Let the pies cool for few minutes before popping them out to serve. The dough is really buttery, so they shouldn't stick to your pan. If they do, use a knife to help :) 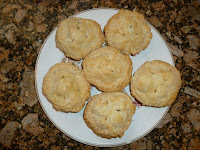 Mmmmm, these are delicious (Definitely not Mrs. Lovett's "worst pies in London"!). And they are perfect to heat up again for tomorrow's dinner! I highly recommend that you give them a try. And enjoy! 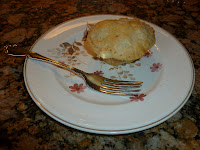 Posted by Nikki in the Kitchen

Email ThisBlogThis!Share to TwitterShare to FacebookShare to Pinterest
Labels: Harry Potter and the Goblet of Fire, vegetarian meat pies

Nikki in the Kitchen
Just your standard Harry Potter fan who loves cooking and sharing recipes. So kick the House Elves out of the kitchen, throw on an apron, and let's get cooking!