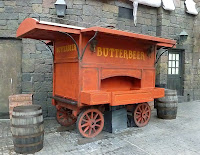 
"'Here-- you've earned a drink-- something from the Three Broomsticks. You won't have tried it before-' He [Lupin] pulled two bottles out of his briefcase. 'Butterbeer!' said Harry, without thinking. 'Yeah, I like that stuff!'" (Prisoner of Azkaban 246).

And how could he not like it? Anyone who has had the joy of visiting The Wizarding World of Harry Potter has surely tasted their delightful rendition of butterbeer. In case you aren't able to just pop down to Orlando, Florida for a butterbeer (holy moly, I miss being able to do that!), there are dozens of recipes floating around the Internet that you can try. Quite awhile ago, I created my own very simple version, which is what we'll use today. It's very sweet, but then again, so is every other recipe for butterbeer I've tried! 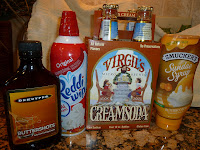 1. Pour a small amount of your schnapps/syrup into a tall glass or stein (not more than 1/2" or you'll be dying from the sweetness!)
2. In a separate small cup or bowl, add some whipped cream (a few dollops or so). Add a nice squeeze of butterscotch topping, and whisk together well. 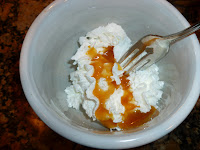 3. Pour your cream soda over the schnapps/syrup, leaving at least 3/4" left at the top of the glass. 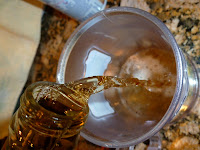 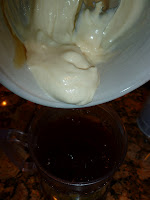 *Do NOT stir, or else the butterbeer will foam up everywhere! 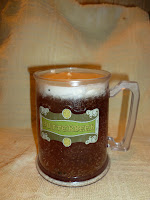 In my opinion, this tastes almost exactly like the butterbeer served at Universal Orlando (with the added bonus of being alcoholic!). Super easy! Super tasty! But be careful, drink too much and you'll end up like Winky in Goblet of Fire-- sloshing butterbeer down your front while you fall asleep hiccuping on the kitchen floor!
Posted by Nikki in the Kitchen No comments:

Email ThisBlogThis!Share to TwitterShare to FacebookShare to Pinterest
Labels: butterbeer, Harry Potter and the Prisoner of Azkaban, Wizarding World of Harry Potter

While we have already made "mulled mead," we have yet to enjoy just plain old mead. And mead happens to be Sir Cadogan's beverage of choice:


"He pushed up his visor and toasted them with a flagon of mead. 'Merry--hic--Christmas! Password?'" (Prisoner of Azkaban 230).

Like brewing beer, making mead takes several weeks. There are many different recipes available online, from the very simple to the extremely complicated. I've said before that mead is technically wine made from honey. I don't think I mentioned however, that based on the type of yeast (and how much yeast) is used in the recipe, it often tastes more like beer than wine (unless you infuse it with berries or other delicious things like a friend of mine just did... yummy).

Because it takes so very long to make, we will not be brewing mead here on In the Kitchen with Harry Potter. But if you're curious, I definitely recommend you google yourself a recipe and choose whichever one suits your fancy!
Posted by Nikki in the Kitchen No comments:

Email ThisBlogThis!Share to TwitterShare to FacebookShare to Pinterest
Labels: Harry Potter and the Prisoner of Azkaban, mead


If you have any questions regarding tripe, you can check it out on Wikipedia. Since simply looking at unprepared tripe makes me want to vomit, we will not be trying to make a vegetarian version of this disgusting Victorian "delicacy."

Ew. Just ew.
Posted by Nikki in the Kitchen No comments:

Email ThisBlogThis!Share to TwitterShare to FacebookShare to Pinterest
Labels: Harry Potter and the Prisoner of Azkaban, tripe

Nut brittle always makes me think of the game Candyland (best game ever!). One of the characters in it was named Grandma Brittle or something like that. But something tells me that our next new food item makes Harry think of his favorite mother-figure, not a boardgame:


"Mrs. Weasley had sent him a scarlet sweater with the Gryffindor lion knitted on the front, also a dozen home-baked mince pies, some Christmas cake, and a box of nut brittle" (Prisoner of Azkaban 222).

Brittle has never been my favorite sweet, but most people like it, so it's the perfect thing to make and then give away! There's a pretty simple recipe for "Any-Nut Brittle" in The Unofficial Harry Potter Cookbook, so that's the recipe we'll use! 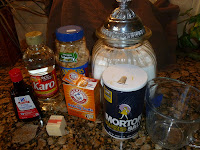 1. Grease a rimmed baking sheet and line it with parchment paper.
2. Clip a candy thermometer to a (at least) 4 qt saucepan. Place the sugar, corn syrup, water, and salt in the saucepan and cook over medium-high heat, stirring constantly, until the temperature reaches 280 degrees. 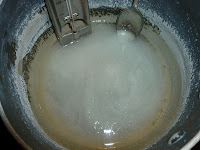 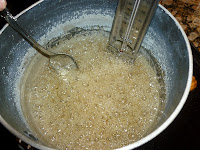 3. Add the butter and nuts and continue cooking, stirring constantly (it gets thick quickly, so really stir!!), until the mixture reaches 300 degrees. For once, this actually happened really quickly for me! 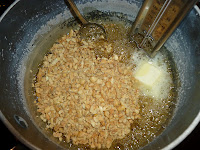 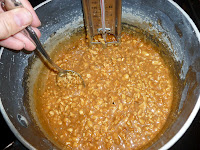 4. Remove the pan from the heat and stir in the vanilla and baking soda. Be careful, because the micture will bubble and expand a lot! 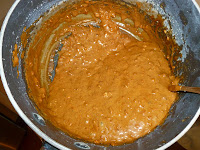 5. QUICKLY pour the mixture into the prepared pan and QUICK AS YOU CAN spread it out as much as you can; you're shooting for about 1/4" thick. Ms. Bucholz says to use a wooden spoon. I think using the hot metal spoon you've been using is a better plan. 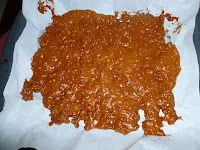 6. Cool completely before breaking into pieces and eating. 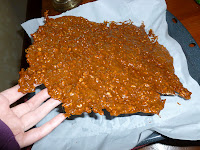 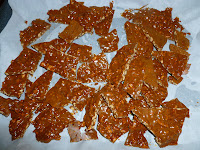 Like I said before, peanut brittle is not my favorite... but my dad took this peanut brittle to work and everyone asked for the recipe. So apparently it's a good one! Enjoy! 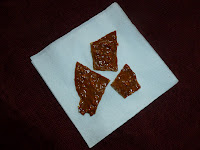 Posted by Nikki in the Kitchen No comments:

Email ThisBlogThis!Share to TwitterShare to FacebookShare to Pinterest
Labels: Harry Potter and the Prisoner of Azkaban, nut brittle

We have once again reached Christmas day at Hogwarts. And you know what that means! Tasty gifts from Mrs. Weasley:


"Mrs. Weasley had sent him a scarlet sweater with the Gryffindor lion knitted on the front, also a dozen home-baked mince pies, some Christmas cake, and a box of nut brittle" (Prisoner of Azkaban 222).

Mince pies are another classically British holiday item. They also used to contain beef-- thus, "mincemeat." Lucky for us, people realized that the pies were much tastier with the beef removed. There is a delicious recipe for mince pies in The Unofficial Harry Potter Cookbook, so that is the recipe we will use today! 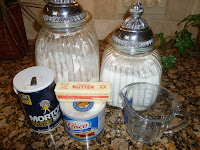 1. Place the flour, sugar, and salt in your food processor and pulse a few times to combine.
2. Scatter the pieces of butter and shortening over the flour mixture and pulse until it resembles coarse yellow meal, 15-20 pulses. 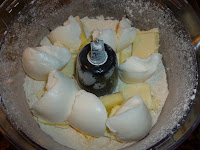 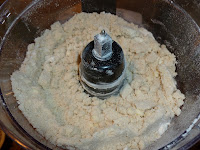 3. Transfer the mixture to a large mixing bowl. Sprinkle 1/2 cup cold water over the mixture and toss with a spatula until the dough sticks together. If the dough is too dry (mine was, a little), add more water 1 Tbs at a time.
4. Divide the dough in half, form into disks, wrap in plastic wrap, and chill in the fridge at least 1 hour or up to 3 days (this is quite perfect, because the filling takes over 90 minutes to make!). 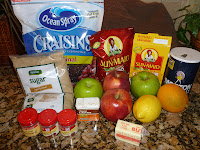 1. Combine all the filling ingredients, except for the butter (and brandy) in a large saucepan. 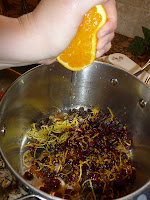 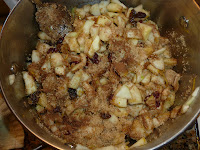 2. Cook over medium-high heat, stirring, until the mixture boils. Reduce the heat to low and simmer for 1.5 hours.
3. Bring the mixture back to a boil, and cook, stirring constantly, until the liquid has evaporated and the mixture is very thick, 5-10 minutes. 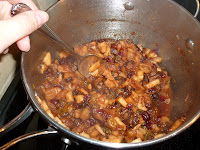 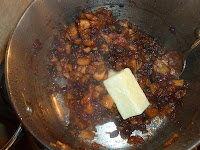 5. Cool to room temperature and then chill until cold.
6. On a generously floured surface, roll out one of the disks of dough to about 1/8" thick. Cut 4.5" circles (I used a GIANT mug as a template). Shoot for ten circles (I got 8, and then smooshed one more out of the scraps). 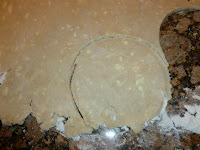 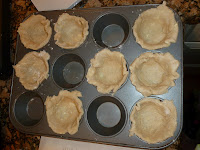 8. Scoop 1 heaping tablespoon of filling into each crust. 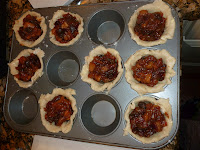 9. Roll out the second disk of dough and cut out slightly smaller circles (Ms. Bucholz says 3.5").
10. Moisten the edges of the pies and attach the tops by crimping the edges with a fork or your fingers. 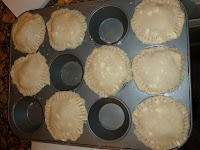 11. Brush the tops of the pies with the beaten egg mixture and sprinkle with the cinnamon sugar. Cut slits for vents (oops).
12. Bake for 30-40 minutes at 350 degrees until dark golden brown. 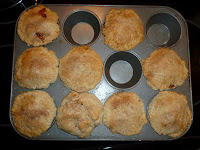 13. Cool the pies completely in the pan, then slide a knife around the edges and lift them out gently.

These are quite delicious, and their small size makes them easy to serve and to keep yourself from eating too many! They would be quite tasty on a cold winter day. Perhaps Christmas at Hogwarts? Whenever you decide to try them out, enjoy! 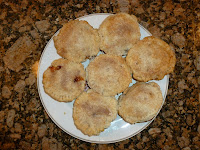 Nikki in the Kitchen
Just your standard Harry Potter fan who loves cooking and sharing recipes. So kick the House Elves out of the kitchen, throw on an apron, and let's get cooking!